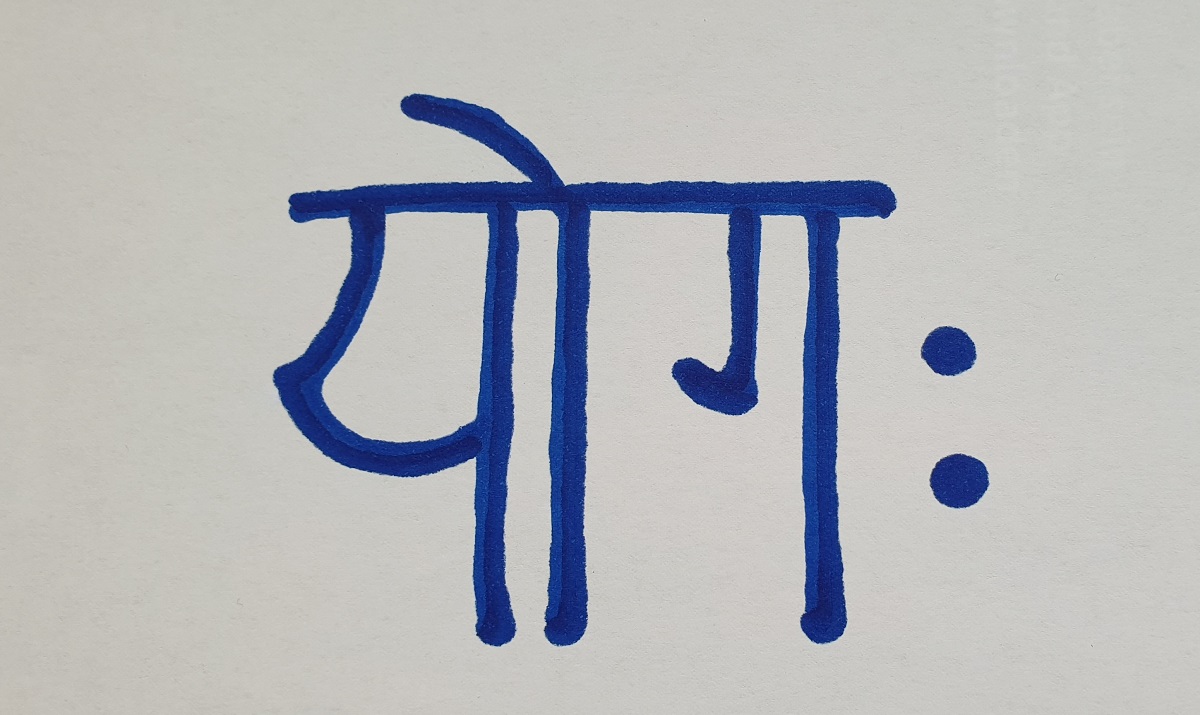 The word yoga in Devanāgarī

The origin of Sanskrit

The word  Sanskrit or in transliteration saṃskṛta  means „perfected, holy”.

There exist many myths around Sanskrit. So the creator god Brahma is said to have created Sanskrit first, and then through the power of the sounds of Sanskrit this universe. According to another myths, the wise seers first perceived the mantras, and only as a second step derived Sanskrit from the mantras.

According to tradition, it is therefore extremely important to pronounce vedic mantras in the correct intonation for them to be effective.

For me personally, Sanskrit has through its sounds a direct effect on the body – independent of the understanding of the individual words, just through the vibration. Often, I have the impression that deep down the meaning has arrived long before my mind is able to grasp it.

Sanskrit belongs to the indoeuropean languages, just like English, German, Greek and Latin.

Its importance lies in the fact that already the eldest hymns still known today, the vedas, were sung in Sanskrit (“vedic Sanskrit”, as of about 1500 B.C.).

Sanskrit was systematized relatively early, by Panīṇī. He wrote a grammar of “classical Sanskrit” already in the 5th century B.C.. 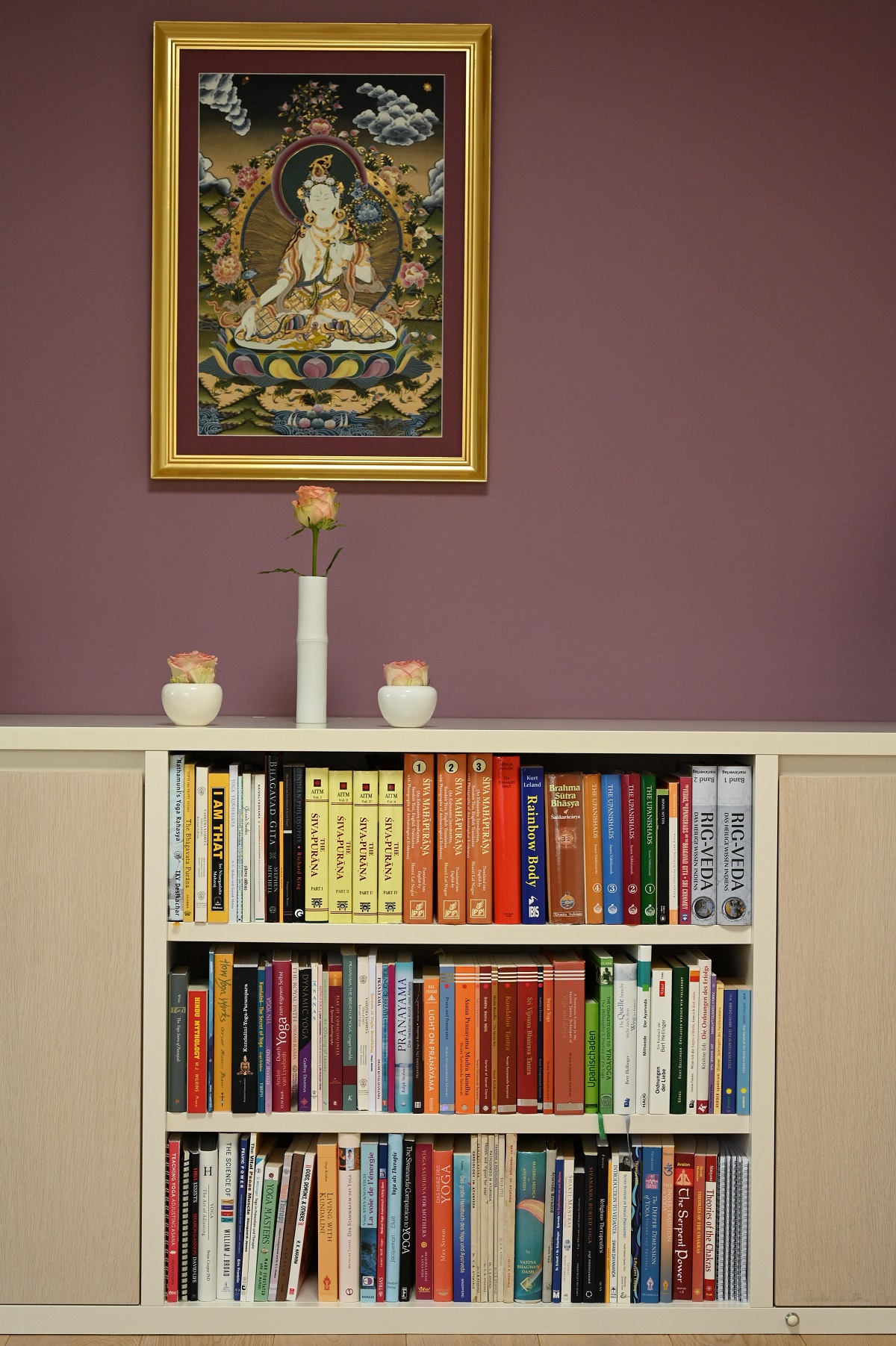 There are different systems of transliteration, e.g. the romanisation of Sanskrit. The International Alphabet of Sanskrit Transliteration (IAST) is considered to be the academic standard. It has been used for more than 100 years.

In order to represent sounds that have no correspondence in the latin alphabet, so-called diacritical signs are added to the letters, i.e. the hyphen above the a, i and u means that these vowels are pronounced two times as long as those without the hyphen.

Originally, Sanskrit was only passed on orally. Still today, there are priests who argue against the written transfer of for instance the vedic hymns.

Nevertheless, these days it is written in different scriptures, since about a millennium most often in Devanāgarī.

The word „Devanāgarī“ is composed of the words „deva“ (god, gods) and „nāgarī“ (city, area, residence). According to Zoë, a possible translation is “scripture of the gods”. It is often also translated as divine city writing.

Devanāgarī is written in syllables, e.g. each letter represents a syllable. There are 49 letters that are put in a certain order according to whether they are a vowel or a consonant and where within the mouth the sound is originating.

For Germans, pronounciation of the transliteration is relatively straight forward, with a few exceptions. For English speakers, it is important to learn the exact pronounciation of all letters, as there are many differences. For instance, the “i” in English would be pronounced like “eye”, whereas in Sanskrit like the English vowel “e”.

I have started to learn Sanskrit in 2018, and it is a source of a lot of joy. Having said that, it also – like any language, but especially so as it is not really possible to practice conversation in Sanskrit – requires time, a lot of patience and many repetitions.

If you are a practicing yogi with a good knowledge of English, I recommend my teacher’s book  Yogāvatāraṇam and the online courses that Zoë is offering via the Oxford Center for Hindu Studies as an ideal way to learn Sanskrit. In her book, Zoë combines in a (to my knowledge) unique form the traditional approach for learning Sanskrit – through mantras, translations and so on and chants – with the academic approach. Of course it helps that Zoë does not only hold a university degree in  Asian languages (she is currently finishing her Ph.D. on an ancient Sanskrit manuscript), but she has also practiced and taught Ashtanga Yoga for more than 20 years. Therefore, her examples and exercises are well related to yoga philosophy and yoga practice.

Since autumn 2019, I offer private classes and introductory courses for Sanskrit on the basis of Zoë’s book  Yogāvatāraṇam. Please bear in mind that I am still a relative beginner of Sanskrit studies, so these classes are meant as a support for interested students who are unable or uninterested in participating Zoë’s online courses, but would still lile t use her book as a basis for exploring Sanskrit.

During the introductory weekend, you shall learn to pronounce the Sanskrit alphabet and read and write it in  Devanāgarī.

If you enjoy this and if you find the time for regular practice, I can accompany you to delve deeper into Sanskrit, either in a private class or in a small group, depending on the number of interested participants, their perseverance and their availability timewise, online or on site.

We also have a small study group that meets every Friday morning on site and online to go through Zoë’s book. You would need some knowledge of Sanskrit und Devanagari to join in – but of course we would welcome new participants.

With the help of a learning App, Flashcards Deluxe, I have also developed a material for myself and for those learning with me to facilitate the memorization of letters, writing, vocabulary and the different verses and mantras.

Learn reading and writing in Sanskrit

on site and online